SHELBY SIXTYSIX IS ONE TOUGH MUSTANG 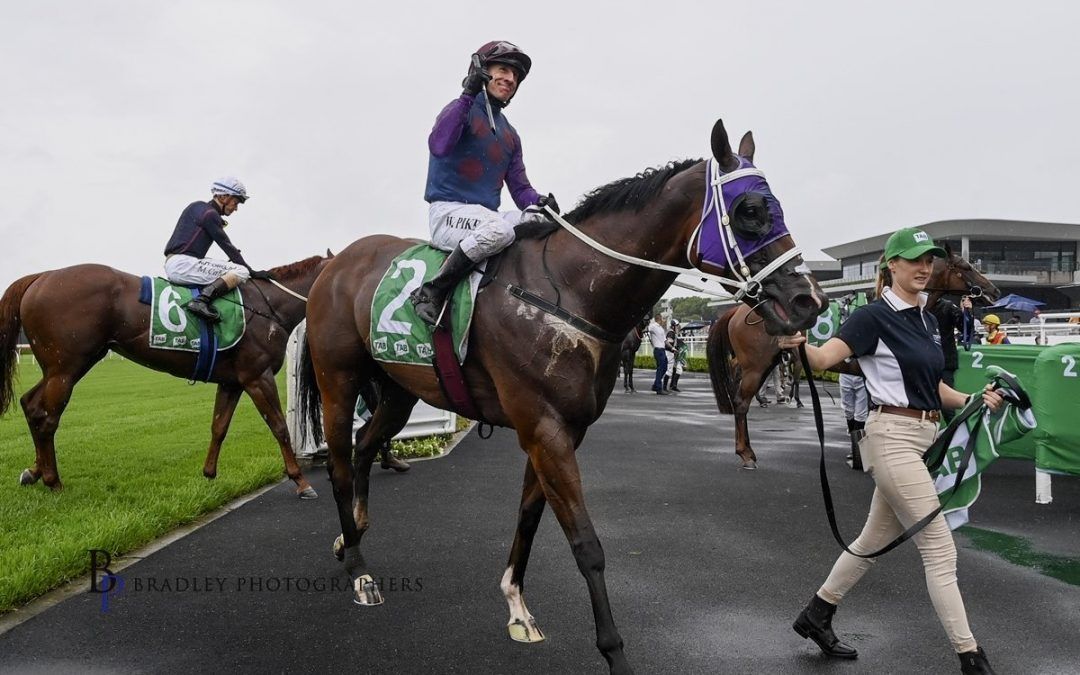 Shelby Sixtysix looked a classic study in soundness as he hurtled down the middle of the track to blow the opposition away in Saturday’s TAB Highway on a rain sodden Randwick. Trainer Danny Williams also filled third and fourth placings in the race with Prince Nicconi and Brazen Impact. Just seven days after a narrow defeat by Golden Point in the same class at Rosehill Gardens, Shelby Sixtysix provided William Pike with his second winner from thirty two rides since arriving in Sydney. Significantly it was the jockey’s maiden win on historic Randwick and his first Saturday win since embarking on a Covid enforced eastern adventure.

For Goulburn trainer Danny Williams, the barnstorming win was part compensation for a four year exercise which has been close to derailment on several occasions. Buoyed by a hot winning streak in the previous racing season, the talented trainer decided to source yearlings of fashionable bloodlines at both the Inglis Classic and Easter Sales of 2018. “I loved everything about the Toronado colt from Storm Kite at the Classic Sale and before I knew it $150,000 had disappeared from my limited reserves,” said Danny. At the moment the gavel fell, he was the most expensive yearling I’d ever purchased.”

The first hurdle to overcome was the syndication of the colt, and that proved to be more difficult than expected. A couple of casual pledges failed to materialise, but fortunately several friends and associates helped Dan to get a syndicate together. He and his partner Mandy O’Leary actually retained a sizeable share. The colt broke in well and the trainer was really looking forward to testing his potential. Part owner Gary Robinson came up with a name which was instantly familiar to car enthusiasts. The Shelby Sixtysix was the world famous 427 Cobra produced by the Ford Company in the 1960’s under the supervision of Carrol Shelby. The famous designer also had a major role in the modification of the ever popular Mustang.

A few months later Danny was wishing he’d never seen the Toronado colt. Every time he was allowed to stride along, he would be noticeably lame on pulling up. By the time he arrived back at the stables, the youngster would be walking freely. A few days later it was the same thing all over again. Lame on pulling up, sound on returning to the stables. With local vets unable to pinpoint the problem, Dan booked an appointment with the Agnes Banks Vet Clinic for Nuclear Scintigraphy Scanning. The diagnosis left him stunned. The prognosis was a little more heartening.

The young horse was a victim of Palmar Osteochondral Disease in both front joints – a condition affecting the lower ends of the cannon bones (condyles). A milder version of the disease was also detected in the off hock. Happily the specialist vets were of the opinion that the young horse had an excellent chance of returning to training and racing, provided he was given ample time and careful management. The Toronado colt was in the right stable. Under the expert care of Danny Williams, Shelby Sixtysix has raced twenty one times for three wins and ten placings for $175,000 in prize money. Not surprisingly the majority of his best runs have been on rain affected tracks.

As if the talented trainer hasn’t had enough problems dealing with the gelding’s troublesome joints, he’d also had to deal with recurring quarter cracks – perhaps the most frustrating of all racehorse ailments. “With expert help from my farrier, we’ve been able to manage his feet problems but you can never be sure when the problem is going to recur,” said Dan. “I remember an occasion when we’d just got on top of his old quarter crack, when out of the blue another one appeared. I’ve lost plenty of sleep over this horse.”

The Danny Williams story is one of racing’s most fascinating. His father Harry was a widely respected country jockey who rode hundreds of winners on the NSW western line. His mother Helen once took out a trainer’s licence and enjoyed a fair measure of success. By his own admission Danny was frightened of horses early in life, but by mid teens the genetic forces had taken over. He had his first race ride as an amateur jockey in the early 1980’s at Tullamore, going under in a tight finish. In a fifteen year career he posted five hundred wins despite the limited number of picnic races programmed. His best performance came when he dominated a two day carnival at the famous Cairns amateurs in Queensland. He achieved the remarkable feat of winning eight of thirteen races.

Thoughts of turning professional had been pounding in Danny’s brain for quite some time. He knew he’d have to shed an enormous amount of weight to make the transition and was painfully aware of the sacrifices necessary to make any kind of impact. He lasted four years. Four years in which he made crazy demands on an already deprived body. His first five rides as a professional all won. Every winner motivated him to keep trying. I can’t recall the name of his first ride in the metropolitan area, but I clearly remember calling the race at a Canterbury midweek meeting. He had it won close to home, only to be grabbed in the last stride by a horse ridden by an up and coming Corey Brown. Danny’s ride was faultless, and he looked as good as any of the top Sydney riders in the race. On another occasion he rode five winners at a Dubbo meeting followed by a treble at Nyngan the following day. Despite drastically limited opportunities, D. Williams rode 100 winners in the pro ranks, and was well satisfied.

Danny was contemplating his future when the phone call came from Alan Cardy. The former Wallaby, Eastern Suburbs Rugby League winger, businessman and horse lover had developed a state of the art training property to be called “Lynton” on the outskirts of Goulburn. Alan had been closely observing NSW racing and seeking opinions about a likely private trainer for his dream thoroughbred operation. His intensive search led him to a former jockey who was planning his future in racing. Like most of Alan Cardy’s business decisions this one also proved successful. Danny and Alan enjoyed a fruitful racing association, and an enduring friendship.

Dozens of winners came off “Lynton” during the fifteen year partnership, twenty two of them in the first twelve months. Normal Practice was the headline act posting eight wins and seven placings for $300,000. He won twice at Gr 3 level, and at just his ninth outing ran out of his skin to finish third in the Gr 1 Newmarket Hcp won by Iska. Normal Practice was not a big horse and battled with foot issues throughout his limited career.

Wasted Emotions was another consistent performer for “Lynton” with eleven wins, nine of them on city tracks. His most notable wins were a Wagga Town Plate and a Gr 3 Hall Mark Stakes. The partnership ended amicably in 2014 when Danny decided to accept a tempting offer to manage Tony McEvoy’s Sydney stable. The thought of training in his own right was now very much on the agenda. His opportunity came under sad circumstances when champion trainer Guy Walter died suddenly just a few days after winning the Doomben Cup with Streama. Danny was privileged to take over Guy’s satellite stable at Goulburn.

He was deeply saddened just before Christmas to learn of the passing of seventy six year old Alan Cardy following a fall in his Coogee home.

The Williams stable has maintained a healthy strike rate these past eight years with regular city winners, including more than twenty TAB Highway successes. Don’t Give A Damn (8 wins) and She Knows (5 wins) have been consistent performers for the stable in recent times. The upcoming Country Championship is Danny’s principal focus at the moment with Shelby Sixtysix and Brazen Impact likely to target the Scone Wild Card on March 20th.

Although still feeling the effects of a shattered pelvis sustained in a trackwork accident a few years ago, Danny continues to ride regular trackwork. His sheer passion for riding racehorses is exceeded only by his desire to monitor the progress of every horse in his care. A horse like Shelby Sixtysix may have fallen by the wayside in another stable. The gelding’s amazing rise to prominence is attributable to the undying devotion of a very rare horseman. Mind you Danny’s not claiming all the credit for Shelby’s impressive form line. He’s well aware that an unusually wet summer has played a big hand. You won’t hear any complaints from the Goulburn trainer if this rain continues right up to Country Championship week.