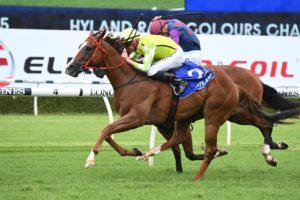 Danny Williams’ roughie hope Shelby Sixtysix has run the race of his life nearly knocking Eduardo off his perch when coming from nowhere to finish runner-up in a thrilling edition of the 2022 Challenge Stakes that saw odds-on favourite Nature Strip beaten in third. 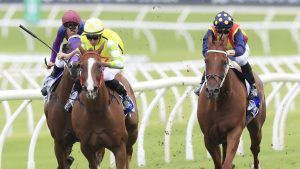 Eduardo was impressive successfully defending his title in the 2022 Challenge Stakes at Randwick. Photo: Steve Hart.

This year’s Group 2 $500,000 Challenge Stakes (1200m) saw great guns Nature Strip for Chris Waller and Eduardo for Joe Pride clash for a ninth time and they were the only two runners in a four-horse affair that the punters had any money on.

After winning a Highway race in the mud here on February 26, it was the fit roughie Shelby Sixtysix who proved the greatest challenger to back-to-back champ Eduardo however.

The Toronado five-year-old charged home late up the fence in a powerhouse finish on another Heavy track.

Only fair away, the race’s 2020 champion and last year’s runner-up Nature Strip was happy to settle second in the run as super sprinter Eduardo went to the front holding on in another incredible all-the-way effort with Nash Rawiller in the saddle.

“He’s a ripper. If Nature Strip wasn’t around, he would be one of the best in the country,” Rawiller told the media after the victory.

“He is a real little bulldog. Today the horse was tactically brilliant, he took Nature Strip out of his comfort zone a bit.”

Nature Strip did the chasing on the home straight and looked to be closing the gap when James McDoanld asked him to go.

Eduardo though was looking very strong at the 300m and was still running 100m out from the line just clinging on when that surprise rival showed up on his inside.

“We were sort of left a sitting shot there the last 50m,” Rawiller admitted.

“He has probably never really been in that situation where he hasn’t had Nature Strip to run down.

“I was trying to be a bit kind to him but then I realised I had to get serious on him again but god bless him, he always pulls out plenty.”

“I think he loved today’s ground. I tried to ride the edge of where I feel it is the best. If anything, Nature Strip came where I thought it was a bit heavier.

“He goes as fast on a track like this as he does on a fast track. Although he gave me 110% the other day, I’ll be honest with you, the other bloke is just too good for him on it.”

The evergreen eight-year-old continued to show his usual zest for racing and added to his very strong wet track form when successfully defending his Challenge Stakes title second-up.

It was an improved effort from the classy chestnut after he placed third behind the Waller quinella of Home Affairs and Nature Strip in Flemington’s Group 1 Black Caviar Lightning (1000m) last time out.

Nature Strip was expected to atone for his horrid luck fresh in the Lightning.

In the end the $16.3 million earner was beaten by not one but two horses on the line, his first time out of the top two since a seventh in the 2020 The Everest.

Winning jockey Rawiller opted to inject a bit more speed in his run and went quick in the lead considering the testing track conditions, which saw Nature Strip come undone.

It nearly saw Eduardo beaten too however, with Shelby Sixtysix wearing down the winning margin in driving finish.

“Nash is a man of few words as everybody knows, but a few of the words that he did say, he said, ‘I want to go quicker today.’ I think that was what brought Nature Strip undone but it nearly brought him undone as well,” Pride said post-win.

“There is a delicate balance there. I’m not going to criticise Nash because he gets it right so many times, but it was probably set up for something to come home then. But a gallant effort from my bloke and just great to get him to win another Group race this preparation. He’s a marvel.”

As for the horse that nearly saw Eduardo beaten?

“It has (run out of its skin). I do that a bit, three weeks in a row. It’s a Brutality move and they’re rock-hard and fit when they do that, I tell you, and they will always run you a good race,” Pride said.

“It was an epic contest again and I’m just so happy to see him (Eduardo) win another Group race.”

The score now stands at 5-4 with Nature Strip still one up on Eduardo and the duo will meet again in next month’s Group 1 $2.5 million TJ Smith Stakes (1200m) back at Randwick on April 2.

Nature Strip is the dual defending champion in the TJ and getting up to six-furlongs he will be without excuses if beaten again this campaign.

Following that, Pride has plans to head up to Queensland with Eduardo for the Brisbane Winter Racing Carnival where the horse won last year’s Group 1 Doomben 10,000 (1200m) on the back of his Challenge Stakes – The Galaxy double and TJ Smith third.

“Four weeks to the TJ and then we will think about Brisbane. The Spring is what beckons after that and I’d just love to keep this horse going for as long as I can and he’s showing no signs of tiredness,” Pride said.

“He has certainly come up well this time around. The TJ and The Everest are the two big ones and I’d love to see this horse win one of those races before he retires.”

The latest all-in 2022 TJ Smith Stakes odds have Nature Strip on top at $3.80 through Ladbrokes.com.au to emulate the great grey Chautauqua who won the race three times on the trot from 2015-17.

Eduardo is the $5 second elect ahead of the three-year-old Home Affairs ($6) with full markets available here.