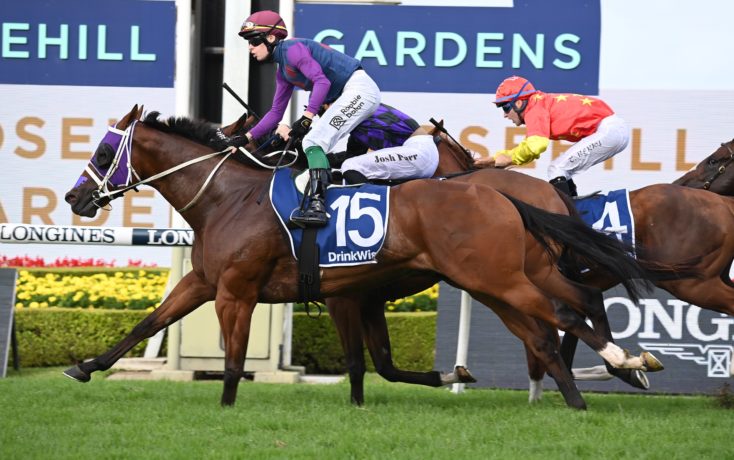 Shelby Sixtysix has given his trainer and jockey their first Group 1 wins.

That was the line from trainer Danny Williams after the most improved horse in training, Shelby Sixtysix, continued his incredible journey from Highway Handicap winner to Group 1 hero with victory in the Galaxy.

It was the Goulburn horseman’s first win at the elite level and even he is at a loss to explain the meteoric rise of his five-year-old gelding.

Shelby Sixtysix has gone from being beaten at the Sapphire Coast earlier this year, to winning a Highway Handicap in February, splitting Eduardo and Nature Strip in the Challenge Stakes, then winning the Group 3 Maurice McCarten Stakes and finally, Saturday’s Group 1 Galaxy (1100m).

“What an incredible story. I can’t believe it. What do you say?” Williams said.

“The horse got beaten here a few runs ago and to be winning a Group One.

“I have been on such a high since the Challenge Stakes and the horse has just gone right to the sky.

“I have been in the industry since I was 12-years-old and I never thought I’d get to this level. It’s amazing.”

Not only has Shelby Sixtysix been a revelation, he has been racing on successive weekends, relishing Sydney’s wet autumn tracks.

Williams isn’t sure where the five-year-old will appear next, but he isn’t ruling anything out, including a T J Smith Stakes rematch with Eduardo and Nature Strip.

The victory was also a first Group 1 win for young jockey Robbie Dolan, who recently lost the ride on three-year-old Profondo after the colt’s unplaced run in the Australian Guineas and he was thrilled to bounce back in style.

“Racing is swings and roundabouts, you just have to take it on the chin,” Dolan said.

“I’m just very grateful to get on this horse today.

“Danny gave me my first couple of winners in Australia. I used to ride for him a lot down in Goulburn, he’s always been a big supporter of mine. Unbelievable training performance.”