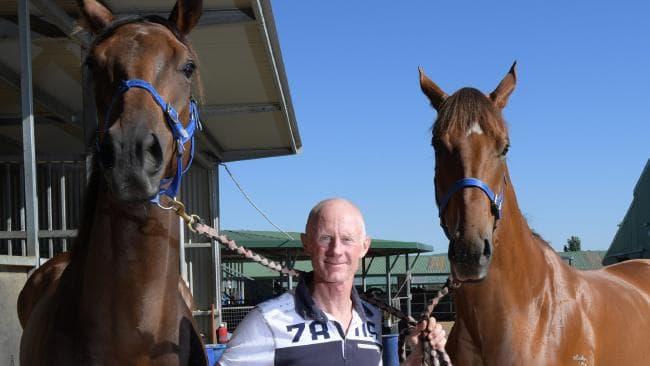 DANNY Williams and Matthew Dunn been the dominant country trainers in Sydney all season and it will come down to the final event of 2017/18 to determine who is the king of the Highway races.

Williams has trained 15.5 Highway winners this season compared to Dunn’s 16 and they have horses racing in the Highway Plate (1500m) at Rosehill Gardens on Saturday.

They may be based almost 1000km apart, Williams in Goulburn and Dunn in Murwillumbah, but there’s plenty of healthy respect between the pair.

“I met Keira Dunn (Matthew’s wife) at Muswellbrook and I told her that the competition between Matt and I has been a healthy one,” Williams said.

“I think it’s done both of us good. It’s been a very competitive clash and from my point of view it’s lifted us to be a little bit better than the others.

“In my opinion he’s right up there with the top five trainers in his region and south east Queensland. I think he’s a very astute trainer and can produce a nice horse.”

Williams said Dunn’s ability to set the right horse for a Highway race, more than the talent he’s got to choose from, has made him a success and the competition has helped him improve his placing of horses.

Dunn said having a simple formula was the key.

“If a horse is capable of winning a midweek race in town in Brisbane they’re capable of going to a Highway race,” he said.

“Danny and I don’t know each other all that well. We’ve spoken a few times at the races and he’s a nice guy who trains his horses very well. He’s always competing with horses outside the Highways too at normal Saturday city level and does a pretty good job.”

Dunn said the weekly Highways had changed his operation dramatically and he praised Racing NSW, who last week announced they would go from $60,000 events to $75,000 races from September 1, for doing more to look after the battlers in the bush.

“It’s brought me clients I wouldn’t have had due to the media exposure it creates,” Dunn said.

“My horse numbers now are three times what they were a few years ago, so they’ve been great for us. I’ve been able to buy treadmills and build pools (with the prizemoney) to help improve my facility which helps produce more winners.

“The Highway races are encouraging owners to give horses to country trainers which normally would have gone to city trainers and that’s strengthening things across the board.”

Williams said the best part of the $15,000 increase for the weekly Highway races was the amount that will now be paid out from finishing fourth to 10th — between $835 and $1685 more. He said it would ensure trainers have more horses in work which will make training more affordable.

“The numbers will increase in the city and country. People will run horses more now rather than barrier trial them all the time,” Williams said. “It’s more profitable to keep a horse in training now.”

“I’m sure they’ve done it to stop city horses coming out to the country. I think with the way they’ve staggered prizemoney increases they’ve addressed that,” Dunn said.

“I hate it when trainers complain about city trainers coming to the bush to take ‘our prizemoney’ because it’s not ours, it’s the industry’s money.”

On Saturday at Rosehill, Williams feels he’s a good chance of taking out the Highway Plate and overtaking Dunn just before the season is finished.

He lines up Pierino and import Biodynamic.

He slightly favours Pierino who will be ridden out of barrier 10 by Blake Shinn, and the top jockey has already won twice on him from as many rides.

“He had a jump out on Tuesday and he trialled extremely well and he’s as bright as a button. He was very impressive in that jump out,” Williams said.

“It doesn’t matter where he lobs, he‘s just got good gate speed and can be there. Blake has a very good affinity with the horse and he’ll push forward.

“He’s on the way up and is untapped at this stage. He floats when he gets in front but I think we’ll find he’ll give plenty under pressure and that’s the type of horse we want going into the Country Championships next year.”

Pierino was formally trained by Team Hawkes and had to have three runs for Williams before he was eligible for a Highway race.

He won the first two at Goulburn but things didn’t quite go to plan last start at Moruya when he was run down late by Melberra Star as a $1.70 chance.

“We thought we’d give him a soft kill the other day but he came down the inside part of the track, which was off,” Williams said. “You had to be out in the middle or wide. The wider you got the faster it was. Nothing won from leading all day either.

“It was a bit of a shock because I thought he was good thing in that race.”

Biodynamic is the other Williams runner and he’s a five-year-old import having his 10th start in Australia after showing good form in Europe over 2000m and beyond.

“Two years running I went over to the UK and bought a horse each year at Newmarket and he was an outstanding walking horse who really caught my eye when I first saw him,” Williams said. “He ran 13th in the Epsom Derby and the horse that ran 12th (Ulysses) came out and ran fourth in the Breeders’ Cup Turf so I thought that was good enough form.”

But Biodynamic suffered a virus soon after landing in Australia in 2017 and is only now starting to find his feet. He comes off an encouraging third placing at Moruya and caught the eye late running on from the rear of the field with a big weight over a sprint trip.

“He’s turned the corner,” Williams said. “It was like a switch turned on overnight and he came good. We need a bit of rain for him. His danger is if the track is too firm.

Dunn feels he has the horse to beat any rival in Saturday’s 15-horse field with the talented Wallander.